You are here: Home / Archives for training camp 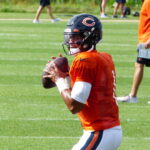 The Bears chose to pull up stakes at Olivet Nazarene College in Bourbonnais after the 2019 season. They had no idea that a pandemic would get between their efforts to set up shop at Halas Hall. The players, staff, and media certainly enjoy the change of venue. Perhaps the fans from the southern part of Chicagoland weren't in favor of the new location. But the Bears have a … END_OF_DOCUMENT_TOKEN_TO_BE_REPLACED

Finally, the discussion at 2018 Chicago Bears training camp wasn't about linebacker Roquan Smith. Sure there were some queries about the MIA first round draft pick, but the chatter and questions were about last year's top draft pick, Mitch Trubisky, and his progress in coach Matt Nagy's run/pass option offense. Nagy also confirmed that Trubisky will take the field during the … END_OF_DOCUMENT_TOKEN_TO_BE_REPLACED

As the 2018 Chicago Bears gear up to play the Baltimore Ravens in Thursday night's Hall of Fame game, the talk Tuesday at training camp wasn't as much about the game, as it was about holdout draft pick Roquon Smith. Smith, the last of the first round picks to sign, appears to be at odds with the team over language in the contract about the new helmet rule, among other … END_OF_DOCUMENT_TOKEN_TO_BE_REPLACED

The 2018 edition of the Chicago Bears continued their preparation at training camp for their first season under new head coach Matt Nagy Tuesday in Bourbonnais, IL. This session, closed to the public, had the team working on defensive and offensive drills sans pads and helmets. The following day was a scheduled day off, before returning for three consecutive day in full … END_OF_DOCUMENT_TOKEN_TO_BE_REPLACED

In October 2019, at the Ensemble Travel conference in Seattle, I got to hear and talk to one of the most incredible individuals I have ever had the pleasure of meeting. The theme of the annual travel agent convention was "Travel With Purpose." Spencer West lost his legs below his pelvis at age … END_OF_DOCUMENT_TOKEN_TO_BE_REPLACED

with David Rusch and Steve Leventhal On the July 2021 edition of the Home Improvement USA program, Dave and Steve discuss reasons, other than investment purposes, to buy a home instead of renting a … END_OF_DOCUMENT_TOKEN_TO_BE_REPLACED