You are here: Home / Archives for Philadelphia Eagles 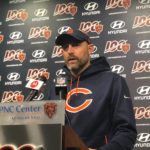 The Bears are a mess. They're 3-5, have lost their lost four in a row and, after a 22-14 loss to the Eagles, their season is likely over. A year filled with so much hope and potential appears to have been wasted. The best-case scenario for the Bears was a defense that repeated last year's success and an offense that took a step forward, from below average to above average. … END_OF_DOCUMENT_TOKEN_TO_BE_REPLACED

with Packer Dave, Steve Leventhal, and John Poulter On the Sports Report this week, Dave and Steve discuss the hiring of a new Green Bay Packers coach, and the surprising end of the Chicago Bears season. Plus, we preview the NFC and AFC Divisional games this weekend. In the second segment, John joins us to talk NHL hockey and English Premier League soccer. Hear … END_OF_DOCUMENT_TOKEN_TO_BE_REPLACED

The NFL playoffs are upon us, and for the first time since 2010, the Chicago Bears are among the 12 teams still standing. They will cap off Wild Card weekend with a faceoff against the defending Super Bowl champion Philadelphia Eagles. It's a tough card to draw, but as the saying goes, to be the best, you have to beat the best. A test on the secondary The Philadelphia … END_OF_DOCUMENT_TOKEN_TO_BE_REPLACED

on the Sports Report with Packer Dave, Steve Leventhal, and John Poulter We look at the 2018 AFC and NFC Championship games. Our special guest Alan Segel checks in from Boston, where we talk about Tom Brady's hand injury and the implications for Sunday's game. John discusses the current state of the NHL from a Canadian perspective, as well as talking English soccer with Steve.  … END_OF_DOCUMENT_TOKEN_TO_BE_REPLACED

A narrative memoir by Steven Leventhal - coming soon. Sign up for the mailing list to get updates. I am working feverishly on my forthcoming memoir. This is the story of a pivotal year in my life. I had a front seat for one of the most … END_OF_DOCUMENT_TOKEN_TO_BE_REPLACED

In October 2019, at the Ensemble Travel conference in Seattle, I got to hear and talk to one of the most incredible individuals I have ever had the pleasure of meeting. The theme of the annual travel agent convention was "Travel With Purpose." Spencer West lost his legs below his pelvis at age … END_OF_DOCUMENT_TOKEN_TO_BE_REPLACED

with David Rusch and Steve Leventhal On the July 2021 edition of the Home Improvement USA program, Dave and Steve discuss reasons, other than investment purposes, to buy a home instead of renting a … END_OF_DOCUMENT_TOKEN_TO_BE_REPLACED