You are here: Home / Archives for New York Giants 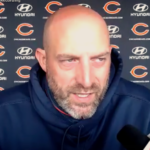 Two weeks, two close calls for the 2020 Chicago Bears. Once again, they held off an opponent inside the red zone with time running out. On Sunday, it was the New York Giants attempting a fourth quarter comeback that fell short for a Bears 17-13 win. The biggest difference between the season opener and the home opener, is that Chicago led from start to finish. However, … END_OF_DOCUMENT_TOKEN_TO_BE_REPLACED

The 2018 Chicago Bears fell to the New York Giants on Sunday in what can only be described as a bizarre game. There were trick plays, a backup quarterback, a defensive touchdown and even an onside kick. The Giants came out victorious in the end though, 30-27. Though it was a win against a first-place team, Giants running back Saquon Barkley described it as "Just a win." He … END_OF_DOCUMENT_TOKEN_TO_BE_REPLACED

The 2018 Chicago Bears, now 8-3 and still in first place in the NFC North, travel East to the Big Apple to face the New York Giants. The Giants’ struggles have been apparent this year, but, like any team, they pose their own set of unique challenges Rushing a weak Giants' offensive line The Giants’ offensive line remains a glaring weakness in their game, even after the addition … END_OF_DOCUMENT_TOKEN_TO_BE_REPLACED

on The Sports Report with Packer Dave, Steve Leventhal, Jeff Rich, and John Poulter Joined by special guest Mark Grote, the newest member of the Chicago Bears radio broadcast team. He talks about his role as the sideline reporter. In addition, he helps us analyze the selection of Georgia LB Roquan Smith with the eight overall pick in the 2018 NFL Draft. Dave, Steve, and Jeff … END_OF_DOCUMENT_TOKEN_TO_BE_REPLACED

on the Weekend Sports Report with Packer Dave and Steve Leventhal ...Dionne Miller of ABC 7 in Chicago joins us for a closer look at the Chicago Bears - Green Bay Packers game, at what will be a very chilly Soldier Field Sunday. Plus, our NHL expert John Poulter gives a hockey update, and our SRN Fantasy Football expert, Mike Perlow, chimes in with his DFS picks for Sunday's … END_OF_DOCUMENT_TOKEN_TO_BE_REPLACED

A memoir by Steven Leventhal - coming soon. I am working feverishly on my forthcoming memoir. This is the story of a pivotal year in my life. In 1978 I graduated in a class of 225 from a small town in North Carolina, and entered college that … END_OF_DOCUMENT_TOKEN_TO_BE_REPLACED

In October 2019, at the Ensemble Travel conference in Seattle, I got to hear and talk to one of the most incredible individuals I have ever had the pleasure of meeting. The theme of the annual travel agent convention was "Travel With Purpose." Spencer West lost his legs below his pelvis at age … END_OF_DOCUMENT_TOKEN_TO_BE_REPLACED

with David Rusch and Steve Leventhal On the July 2021 edition of the Home Improvement USA program, Dave and Steve discuss reasons, other than investment purposes, to buy a home instead of renting a … END_OF_DOCUMENT_TOKEN_TO_BE_REPLACED