You are here: Home / Archives for Miami Dolphins 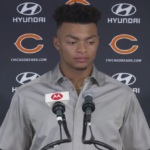 Expectations were naturally elevated, since this was going to be the debut of top pick Justin Fields, a player on whom many fans are heaping hopes of getting this team back into the upper echelon of the NFL elite. That is an awful lot of hype and setting the bar at a very elevated level. Presumptive starter Andy Dalton played the first two series, completing two passes for … END_OF_DOCUMENT_TOKEN_TO_BE_REPLACED

Fresh off their bye week, the Chicago Bears will travel to Miami this Sunday to face the Miami Dolphins. For the first time in a while, the Bears have bountiful momentum and a chance to tighten their grip on their first place position in the NFC North. Will Trubisky build on his success? Mitch Trubisky was simply great in his last game against the Tampa Bay Buccaneers. He threw … END_OF_DOCUMENT_TOKEN_TO_BE_REPLACED

It’s about time… Jay Cutler and the Bears finally put together a complete 4 quarters against the Falcons as they controlled every facet of the game. “We have to get to a point where we can consistently play at a high level on all three phases,” Coach Trestman stated on Thursday. The Bears organization will never admit that they needed the victory, but Phil Emery and Marc … END_OF_DOCUMENT_TOKEN_TO_BE_REPLACED

A narrative memoir by Steven Leventhal - coming soon. Sign up for the mailing list to get updates. I am working feverishly on my forthcoming memoir. This is the story of a pivotal year in my life. I had a front seat for one of the most … END_OF_DOCUMENT_TOKEN_TO_BE_REPLACED

In October 2019, at the Ensemble Travel conference in Seattle, I got to hear and talk to one of the most incredible individuals I have ever had the pleasure of meeting. The theme of the annual travel agent convention was "Travel With Purpose." Spencer West lost his legs below his pelvis at age … END_OF_DOCUMENT_TOKEN_TO_BE_REPLACED

with David Rusch and Steve Leventhal On the July 2021 edition of the Home Improvement USA program, Dave and Steve discuss reasons, other than investment purposes, to buy a home instead of renting a … END_OF_DOCUMENT_TOKEN_TO_BE_REPLACED