You are here: Home / Archives for Jim Harbaugh 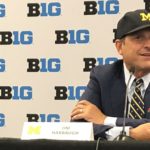 The Big Ten Football Media Days in Chicago kicked off the grind of the college football season, a chance for players and coaches to reflect on “what could be,” in the final days of the offseason. While the football season doesn’t officially kick off until the end of August, this is where players start to finish up their offseason training and coaches get closer to naming their … END_OF_DOCUMENT_TOKEN_TO_BE_REPLACED

The annual Big Ten Media Days took place in Chicago this week, and accompanying it came many storylines. With the first day in the books, it's time to take a look at the teams who met with the press from day one of this year's gathering. Nebraska New head coach Scott Frost has made it his mission to resurrect Nebraska's legacy, saying, "The parents all remember Nebraska as … END_OF_DOCUMENT_TOKEN_TO_BE_REPLACED

In 1992, Jerry Rice caught his record-setting 101st NFL touchdown pass. The Heisman Trophy was awarded to Ernie Davis of Syracuse in 1961, Archie Griffin of Ohio State in 1975, and to Vinny Testaverde of Miami in 1986. The other finalists were Paul Palmer from Temple, future Michigan coach Jim Harbaugh, and the popular Brian Bosworth of Oklahoma. https://youtu.be/KN0sUcDGxU0 … END_OF_DOCUMENT_TOKEN_TO_BE_REPLACED

The offseason for college sports is like when a really hyped movie releases a trailer months before it’s actual release.  Fans can’t wait until it comes out.  But instead of full length trailers, you get lots and lots of teasers from your favorite teams. Considering the Big Ten won the first championship in the 4-team playoff format, there’s a lot to look forward to this year. … END_OF_DOCUMENT_TOKEN_TO_BE_REPLACED

on the Weekend Sports Report with Packer Dave and Steve Leventhal ....we are pleased to be joined by John Mullin of Comcast Sports Net - Chicago.  He gives us a Bears training camp preview, and also talks about the great 1985 Chicago Bears team.  Sam the intern checks in from Big Ten media days with a special report. Also John Poulter and Jeff Rich talk about baseball as the … END_OF_DOCUMENT_TOKEN_TO_BE_REPLACED

A narrative memoir by Steven Leventhal - coming soon. Sign up for the mailing list to get updates. I am working feverishly on my forthcoming memoir. This is the story of a pivotal year in my life. I had a front seat for one of the most … END_OF_DOCUMENT_TOKEN_TO_BE_REPLACED

In October 2019, at the Ensemble Travel conference in Seattle, I got to hear and talk to one of the most incredible individuals I have ever had the pleasure of meeting. The theme of the annual travel agent convention was "Travel With Purpose." Spencer West lost his legs below his pelvis at age … END_OF_DOCUMENT_TOKEN_TO_BE_REPLACED

with David Rusch and Steve Leventhal On the July 2021 edition of the Home Improvement USA program, Dave and Steve discuss reasons, other than investment purposes, to buy a home instead of renting a … END_OF_DOCUMENT_TOKEN_TO_BE_REPLACED