You are here: Home / Archives for Anthony Miller 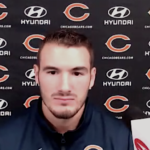 The only thing that could have derailed a classic comeback by Chicago, was Matthew Stafford's performance in the two-minute offense late in this game. D'Andrew Swift saw the game winning catch with six seconds left slip in and out of his grasp on third and ten. The ensuing fourth down attempt fell harmlessly incomplete to seal a victory by the Bears. The 27-23 win seemed as … END_OF_DOCUMENT_TOKEN_TO_BE_REPLACED 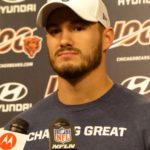 Down 20-17 with 5:27 remaining in the fourth quarter, Mitchell Trubisky and the Bears faced a 3rd-and-four at their own 16. At the risk of falling even further behind to a third-string quarterback, it was a do or die moment that Trubisky had rarely made good on. This time, Trubisky came through, stepping up into the pocket against the Lions' four-man rush and delivering a … END_OF_DOCUMENT_TOKEN_TO_BE_REPLACED

Football is back! The grueling months of off-season speculation, predictions, controversies and stories that simply won't go away, have finally come to an end. So, when Chicago Bears fans hear the iconic trumpets of NBC's presentation of "Sunday Night Football," an all-too unfamiliar feeling of optimism will accompany their excitement. A whirlwind off-season, capped off with … END_OF_DOCUMENT_TOKEN_TO_BE_REPLACED

The Chicago Bears will play their fourth preseason game Saturday night against the Kansas City Chiefs, inching closer to the end of their atypical, five-game preseason. With that, we examine where the Bears currently stand and what to watch for heading into the most important game of the preseason. Takeaways Matt Nagy's offense is certainly tailored to Mitch Trubisky To state … END_OF_DOCUMENT_TOKEN_TO_BE_REPLACED

A narrative memoir by Steven Leventhal - coming soon. Sign up for the mailing list to get updates. I am working feverishly on my forthcoming memoir. This is the story of a pivotal year in my life. I had a front seat for one of the most … END_OF_DOCUMENT_TOKEN_TO_BE_REPLACED

In October 2019, at the Ensemble Travel conference in Seattle, I got to hear and talk to one of the most incredible individuals I have ever had the pleasure of meeting. The theme of the annual travel agent convention was "Travel With Purpose." Spencer West lost his legs below his pelvis at age … END_OF_DOCUMENT_TOKEN_TO_BE_REPLACED

with David Rusch and Steve Leventhal On the July 2021 edition of the Home Improvement USA program, Dave and Steve discuss reasons, other than investment purposes, to buy a home instead of renting a … END_OF_DOCUMENT_TOKEN_TO_BE_REPLACED