You are here: Home / Archives for Allen Robinson 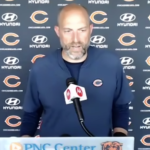 The 2021 Chicago Bears are nothing but optimistic for the coming season as the Veterans’ Minicamp wraps up. After an 8-8 season followed by a playoff loss a lot of questions surround the Bears. How is Justin Fields progressing? How will Allen Robinson fare after yet another quarterback change? How does Jimmy Graham feel about returning after heading straight to the locker room … END_OF_DOCUMENT_TOKEN_TO_BE_REPLACED

The way the team puts it, they have been in the a continuous series of one game playoffs for the past three weeks. Their win against the Jaguars, coupled with Arizona's loss to San Francisco leaves the Chicago Bears in control of their own destiny. That's no easy feat with the final game of the 2020 regular season at hand. Another game against the Green Bay Packers stands … END_OF_DOCUMENT_TOKEN_TO_BE_REPLACED

The newly crowned 2018 NFC North Champion Chicago Bears will be in San Francisco this week to face the 49ers. The 49ers carry with them unfamiliar momentum, having won their past two games. The Bears will play for seeding this week, with a first-round bye still very much in play after the Rams loss to the Eagles. A win over the 49ers could end up as the deciding factor between … END_OF_DOCUMENT_TOKEN_TO_BE_REPLACED

The 2018 Chicago Bears fell to the New York Giants on Sunday in what can only be described as a bizarre game. There were trick plays, a backup quarterback, a defensive touchdown and even an onside kick. The Giants came out victorious in the end though, 30-27. Though it was a win against a first-place team, Giants running back Saquon Barkley described it as "Just a win." He … END_OF_DOCUMENT_TOKEN_TO_BE_REPLACED

Fresh off their bye week, the Chicago Bears will travel to Miami this Sunday to face the Miami Dolphins. For the first time in a while, the Bears have bountiful momentum and a chance to tighten their grip on their first place position in the NFC North. Will Trubisky build on his success? Mitch Trubisky was simply great in his last game against the Tampa Bay Buccaneers. He threw … END_OF_DOCUMENT_TOKEN_TO_BE_REPLACED

A memoir by Steven Leventhal - coming soon. I am working feverishly on my forthcoming memoir. This is the story of a pivotal year in my life. In 1978 I graduated in a class of 225 from a small town in North Carolina, and entered college that … END_OF_DOCUMENT_TOKEN_TO_BE_REPLACED

In October 2019, at the Ensemble Travel conference in Seattle, I got to hear and talk to one of the most incredible individuals I have ever had the pleasure of meeting. The theme of the annual travel agent convention was "Travel With Purpose." Spencer West lost his legs below his pelvis at age … END_OF_DOCUMENT_TOKEN_TO_BE_REPLACED

with David Rusch and Steve Leventhal On the July 2021 edition of the Home Improvement USA program, Dave and Steve discuss reasons, other than investment purposes, to buy a home instead of renting a … END_OF_DOCUMENT_TOKEN_TO_BE_REPLACED