You are here: Home / Archives for Sam Dintruff

The 2021 Chicago Bears are nothing but optimistic for the coming season as the Veterans’ Minicamp wraps up. After an 8-8 season followed by a playoff loss a lot of questions surround the Bears. How is Justin Fields progressing? How will Allen Robinson fare after yet another quarterback change? How does Jimmy Graham feel about returning after heading straight to the locker room … END_OF_DOCUMENT_TOKEN_TO_BE_REPLACED 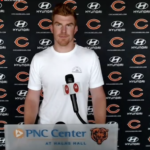 After 2020 voluntary workouts proved to be a unique experience during a pandemic, the 2021 voluntary workouts are back to, for a lack of a better word, normal. The coaches and training staff are having discussions in person rather than over Zoom, and the players are returning to the field to practice as a team. "Last year, as you all know, we’re sitting just like we’re … END_OF_DOCUMENT_TOKEN_TO_BE_REPLACED 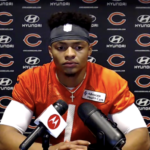 The Bears sparked a lot of buzz in April when they traded up to take quarterback Justin Fields in the draft. The team hasn't had a first first-round pick since 2018 as a result of the Khalil Mack trade. Fields appears to be adjusting well in to being Chicago. "I would say it's probably the same," said Fields comparing his college strategy to the pros. "I think the only … END_OF_DOCUMENT_TOKEN_TO_BE_REPLACED

A narrative memoir by Steven Leventhal - coming soon. Sign up for the mailing list to get updates. I am working feverishly on my forthcoming memoir. This is the story of a pivotal year in my life. I had a front seat for one of the most … END_OF_DOCUMENT_TOKEN_TO_BE_REPLACED

In October 2019, at the Ensemble Travel conference in Seattle, I got to hear and talk to one of the most incredible individuals I have ever had the pleasure of meeting. The theme of the annual travel agent convention was "Travel With Purpose." Spencer West lost his legs below his pelvis at age … END_OF_DOCUMENT_TOKEN_TO_BE_REPLACED

with David Rusch and Steve Leventhal On the July 2021 edition of the Home Improvement USA program, Dave and Steve discuss reasons, other than investment purposes, to buy a home instead of renting a … END_OF_DOCUMENT_TOKEN_TO_BE_REPLACED