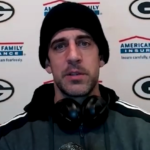 with Packer Dave, John Poulter, and Steve Leventhal On this episode of the Sports Report, get a preview of Game 6 of the 2020 World Series between Los Angeles and Tampa. The fall classic had been a back a forth slugfest between the Dodgers and the Rays. Hear from LA manager Dave Roberts and starting pitcher Tony Gonsolin. We discuss the weekend in the NFL, with several … END_OF_DOCUMENT_TOKEN_TO_BE_REPLACED 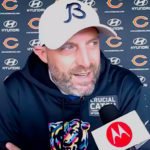 "I'd think we'd rather win ugly than lose pretty!"-Nick Foles The Carolina Panthers forced a three-and-out to get the ball back with 1:32 left in Sunday's game. However, as QB Teddy Bridgewater faced the Bears defensive pressure, he hurriedly threw a pass across the middle of the field towards DJ Moore that was deftly plucked by S DeAndre Houston-Carson. The Chicago … END_OF_DOCUMENT_TOKEN_TO_BE_REPLACED 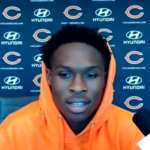 The one thing that every NFL rookie or second year player will tell interviewers, is that the toughest adjustment from college to professional football is the speed of the game and the athleticism of the players. In major college football, a player's teammates were likely all-conference, and undoubtedly the best athletes in their respective high schools. Yet, there is still is … END_OF_DOCUMENT_TOKEN_TO_BE_REPLACED 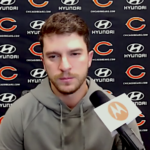 Last Sunday, the 2020 Chicago Bears gave up 19 points to the Colts and lost. This time Chicago gave up another nineteen, but scored 20 to win, and hand Tom Brady his first loss to the Bears franchise. The certain hall of famer had led his teams to a staggering fifty-nine fourth quarter or overtime comeback wins. Instead it was QB Nick Foles in his second full start with the … END_OF_DOCUMENT_TOKEN_TO_BE_REPLACED 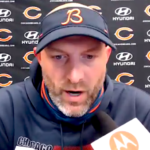 The magic ran out. The clock struck midnight for Cinderella Chicago Bears in a 19-11 home Loss to the Indianapolis Colts. There were no magic tricks up Nick Foles. Just brute force from a Colts defense that keep the cardiac Bears out of the end zone until there was less than two minutes to play. By then, it was too late. There would be no fourth quarter comeback in this game. … END_OF_DOCUMENT_TOKEN_TO_BE_REPLACED

In October 2019, at the Ensemble Travel conference in Seattle, I got to hear and talk to one of the most incredible individuals I have ever had the pleasure of meeting. The theme of the annual travel agent convention was "Travel With Purpose." Spencer West lost his legs below his pelvis at age … END_OF_DOCUMENT_TOKEN_TO_BE_REPLACED

with David Rusch and Steve Leventhal On the July 2021 edition of the Home Improvement USA program, Dave and Steve discuss reasons, other than investment purposes, to buy a home instead of renting a … END_OF_DOCUMENT_TOKEN_TO_BE_REPLACED