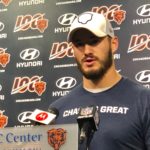 The Chicago Bears and Kansas City Chiefs, for better or worse, have many parallels, starting with the obvious connection between Patrick Mahomes and Mitchell Trubisky, two quarterbacks taken in the same draft class who have veered into completely different careers. Matt Nagy, a former Chiefs protege, was hired as the Bears coach before the 2018 season to do what he and … END_OF_DOCUMENT_TOKEN_TO_BE_REPLACED 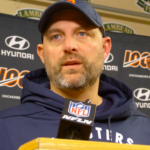 Week 15 of a tumultuous 2019 Bears season still carried an outside hope of the playoffs, however small those hopes may have been. The Bears, fresh off an impressive showing against the Dallas Cowboys over a week ago, could improve their playoff hopes in the 200th meeting them and the Packers. Those hopes were officially put away on Sunday, as the Bears were eliminated from … END_OF_DOCUMENT_TOKEN_TO_BE_REPLACED

2019 has not been kind to the Bears, especially not to Matt Nagy and Mitchell Trubisky. For the first half of the season, the Bears were an offense without an identity, led by a quarterback who seemed lost, coached by someone the city had turned on. The image of Mitchell Trubisky being talked to on the sideline during the Bears Week 11 blunder at the hands of the Los Angeles … END_OF_DOCUMENT_TOKEN_TO_BE_REPLACED

A narrative memoir by Steven Leventhal - coming soon. Sign up for the mailing list to get updates. I am working feverishly on my forthcoming memoir. This is the story of a pivotal year in my life. I had a front seat for one of the most … END_OF_DOCUMENT_TOKEN_TO_BE_REPLACED

In October 2019, at the Ensemble Travel conference in Seattle, I got to hear and talk to one of the most incredible individuals I have ever had the pleasure of meeting. The theme of the annual travel agent convention was "Travel With Purpose." Spencer West lost his legs below his pelvis at age … END_OF_DOCUMENT_TOKEN_TO_BE_REPLACED

with David Rusch and Steve Leventhal On the July 2021 edition of the Home Improvement USA program, Dave and Steve discuss reasons, other than investment purposes, to buy a home instead of renting a … END_OF_DOCUMENT_TOKEN_TO_BE_REPLACED