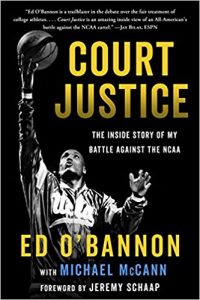 The NCAA is a multi-billion dollar enterprise with a very vested interest in maintaining the status quo.

Decades after Curt Flood and Oscar Robertson sued their respective leagues to gain free agency, the college system is still operating under a set of archaic rules governing “amateurism,” even as young stars in hockey, tennis, and Olympic sports are reaping the benefits of today’s free market.

In his new book, Court Justice, former UCLA Star Ed O’Bannon details his nearly ten year battle with the NCAA to establish that athletes are entitled to compensation for use of their likeness in video games and other areas. In fact, it all began innocently enough with a video game. O’Bannon describes how a friend’s son showed him how his avatar did battle in an EA sports college basketball video game.

He writes, “My lawsuit was really about former players like myself being duped by the NCAA and companies that made video games, rebroadcasts, and merchandise using our names, images, and likenesses.”

O’Bannon’s narrative proceeds in a very personal and candid style. He describes his upbringing, his college and professional years, and life after basketball. An interesting fact from the book was that Ed originally wanted to play at UNLV, not UCLA, and ended up in Westwood, only after Jerry Tarkanian advised him that his program was going on probation. Again the all powerful NCAA flexing its muscle.

The reader gets an inside look at the litigation, the trial, and the subsequent appeals. The book is very timely with references to current sports controversies.

Unlike some authors who disparage the process or the system, but don’t offer any solutions, the last chapter of the book has twelve ideas on how to fix college sports.

Court Justice is an excellent and worthwhile read. An eye opening look at the hypocrisy of college sports, and the efforts of one man to force the NCAA to give these “amateurs” a stake and a say in their sports.

A memoir by Steven Leventhal - coming soon. I am working feverishly on my forthcoming memoir. This is the story of a pivotal year in my life. In 1978 I graduated in a class of 225 from a small town in North Carolina, and entered college that … END_OF_DOCUMENT_TOKEN_TO_BE_REPLACED

In October 2019, at the Ensemble Travel conference in Seattle, I got to hear and talk to one of the most incredible individuals I have ever had the pleasure of meeting. The theme of the annual travel agent convention was "Travel With Purpose." Spencer West lost his legs below his pelvis at age … END_OF_DOCUMENT_TOKEN_TO_BE_REPLACED

with David Rusch and Steve Leventhal On the July 2021 edition of the Home Improvement USA program, Dave and Steve discuss reasons, other than investment purposes, to buy a home instead of renting a … END_OF_DOCUMENT_TOKEN_TO_BE_REPLACED