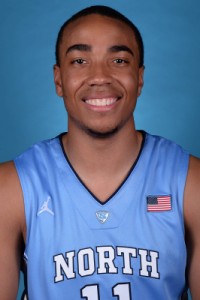 …When Brice Johnson arrived in Chapel Hill, he was supposed to the second coming of John Henson, now with the Milwaukee Bucks. From a distance, they physically resembled each other, but Henson had a big head start in his skill set.  During pre-season conditioning drills, one assistant coach confided in Roy Williams that he did not think Brice was going to make it.  “Through the season?”  “No, coach, through the workouts.” Brice had a lot to learn about the physicality of the college game.

Brice played every game his freshmen year, but often put up [Duke center] Marshall Plumlee-like line scores: more fouls than points.  At times he looked lost, completely unsure as to where he should be on the court, often fouling on hedges twenty-five feet from the basket and earning himself a quick seat on the bench. His free-throw shooting was an adventure, leather often did not find rim.

But Brice persevered, he worked hard, he improved every year.  Dean Smith was legendary for turning projects into NBA pros after four year of tutelage. Now, self-centered kids whose egos far exceed  their abilities leave too soon for the elusive riches of the pro game.  They find themselves riding buses in the D-league when another year of practice and work might have gotten them onto an NBA bench.

Either Brice figured it out himself, or his father/high school coach set him straight.  You need more time under the wheel.  You need to get stronger, shoot better and play smarter.

Now in his senior year, Johnson has demonstrated what hard work will do. From Mr. Basketball in sleepy South Carolina to consensus all-American, the journey is almost complete. No Carolina player had ever blocked eight shots in a game before this year. Now the kid who high jumped his height in high school is using his freakish leaping ability to send balls ten rows deep into the stands. The same kid who often shot airballs at the free throw line is now the guy the opposing coach would never foul with the game on the line. I think Hubert Davis should take some credit for his free throw percentage increasing every year.

On a team that often does not show emotion and is led by a cerebral, charming academic all-American, Johnson’s emotions burn like lighter fluid on the charcoal grill. Before this year, he would fist pump and shout after a dunk while his man sprinted down court unguarded and Roy screamed to get back on defense.  Those antics got him a seat on the bench next to Coach Robinson.  Now, he controls his emotions and waits for the whistle and the clock to stop to voice a primal howl to the student body so visceral it can frighten those who have not witnessed it before.  In the second round tournament game against a gritty Providence team, Brice spun baseline to dunk while his helpless defender pulled on his arm. The whistle sounded and Brice dangled from the rim and reached down in his soul for a primordial scream that made the hair on the back of my neck stand up. Maybe it was the culmination of four years of frustration on the court, maybe it was the agony of a teenage boy who lost his mother too soon, but it was a defining moment.  His team heard him and they never looked back and quickly put the game out of reach.  The man-child has become the man.

In October 2019, at the Ensemble Travel conference in Seattle, I got to hear and talk to one of the most incredible individuals I have ever had the pleasure of meeting. The theme of the annual travel agent convention was "Travel With Purpose." Spencer West lost his legs below his pelvis at age … END_OF_DOCUMENT_TOKEN_TO_BE_REPLACED

with David Rusch and Steve Leventhal On the July 2021 edition of the Home Improvement USA program, Dave and Steve discuss reasons, other than investment purposes, to buy a home instead of renting a … END_OF_DOCUMENT_TOKEN_TO_BE_REPLACED