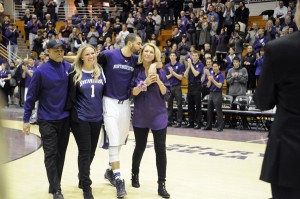 Northwestern wrapped up their 2013-14 home schedule on Thursday evening in disappointing fashion losing to Penn State 59-32 at Welsh Ryan- Arena , the outcome was not what they had hoped for as the Wildcats were ran out of the gym from the opening tip.

Drew Crawford, Nikola Cerina and James Montgomery were all recognized before the game as part of the “Senior Night Ceremony” but even the pumped up crowd there to celebrate could not get the Wildcats (12-18, 5-12) into the game as they would trail 32-15 at the half, after shooting just 6-27 from the field (22%).

Crawford, (who is the Wildcats all time leader in both games played and games started) struggled from the start, finishing with only 6 points in 38 minutes on 2-9 shooting from the field. He exited the game with 74 seconds to play and received a nice ovation from the crowd and his new head coach Chris Collins who couldn’t have been more proud.

“I’m sad I only got a chance to coach him for one year,” Collins said about Crawford in his post game press conference.

“More than anything, I just said, ‘Hold your head high,’” Collins continued. “Because he should. He’s one of the great players to play in this program but not even just the way he’s played, the way he’s carried himself. …  He’s the model of what I want this program to be about.”

Next up for Northwestern will be a road matchup against Purdue and unless they can pull off the victory they will be looking at the number 12 seed in the Big Ten Tournament next week.

A memoir by Steven Leventhal - coming soon. I am working feverishly on my forthcoming memoir. This is the story of a pivotal year in my life. In 1978 I graduated in a class of 225 from a small town in North Carolina, and entered college that … END_OF_DOCUMENT_TOKEN_TO_BE_REPLACED

In October 2019, at the Ensemble Travel conference in Seattle, I got to hear and talk to one of the most incredible individuals I have ever had the pleasure of meeting. The theme of the annual travel agent convention was "Travel With Purpose." Spencer West lost his legs below his pelvis at age … END_OF_DOCUMENT_TOKEN_TO_BE_REPLACED

with David Rusch and Steve Leventhal On the July 2021 edition of the Home Improvement USA program, Dave and Steve discuss reasons, other than investment purposes, to buy a home instead of renting a … END_OF_DOCUMENT_TOKEN_TO_BE_REPLACED