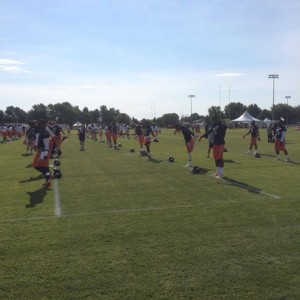 The Chicago Bears spent this offseason adding playmakers on the defensive side of the ball, including the No.14 overall pick in the 2014 NFL Draft, Kyle Fuller, who instantly became a fan favorite on the opening day of practice in Bourbonnais.

Fuller intercepted both Jordan Palmer and Jimmy Clausen during an 11-on-11 scrimmage Friday. However, what was even more impressive was the fact that it was his first day of training camp in the NFL.

” I feel like I handled it pretty well” Fuller said, ” Definitely a confidence booster, you have to continue to work hard, and come out here and get better every day”

While it was only the first day of practice, and there were no pads, it was still pretty evident that Fuller will be able to make an immediate impact for a Chicago Bears defense, which already features two, veteran,Pro Bowl caliber defensive backs (Charles Tillman and Tim Jennings).

Another impressive observation about Fuller— was that even when he was not making plays, he was always in good position. The Bears are hoping he will be able to play in the nickel package and move inside and cover the slot.

Some fans were shocked when the Bears did not draft a safety with the 14th overall pick in the draft. However, Fuller showed the same ball-hawking tendencies on Friday that he did at Virginia Tech, where he broke up 34 balls, and had six interceptions, while logging 42 career starts. He was also a team captain at Virgina Tech, where he played on the same team as his brother Corey. ( now with the Lions)

“It was a good start for Kyle,” Bears head coach Marc Trestman said.“That was a terrific play he made in the first series of the day. The second one we had the wrong route, but he was in the right place and made the play.

A narrative memoir by Steven Leventhal - coming soon. Sign up for the mailing list to get updates. I am working feverishly on my forthcoming memoir. This is the story of a pivotal year in my life. I had a front seat for one of the most … END_OF_DOCUMENT_TOKEN_TO_BE_REPLACED

In October 2019, at the Ensemble Travel conference in Seattle, I got to hear and talk to one of the most incredible individuals I have ever had the pleasure of meeting. The theme of the annual travel agent convention was "Travel With Purpose." Spencer West lost his legs below his pelvis at age … END_OF_DOCUMENT_TOKEN_TO_BE_REPLACED

with David Rusch and Steve Leventhal On the July 2021 edition of the Home Improvement USA program, Dave and Steve discuss reasons, other than investment purposes, to buy a home instead of renting a … END_OF_DOCUMENT_TOKEN_TO_BE_REPLACED