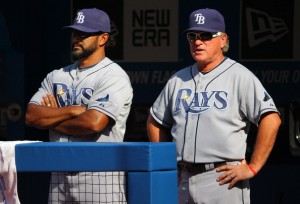 CHICAGO – The Chicago Cubs today named Dave Martinez as the club’s major league bench coach and shifted Brandon Hyde to first base coach.  Additionally, Henry Blanco has been named the club’s major league quality assurance coach.  Doug Dascenzo, who had been named first base coach on October 9, will remain in the organization as outfield and baserunning coordinator with responsibilities in the major and minor leagues.

Martinez, 50, served as Joe Maddon’s bench coach in Tampa Bay the last seven seasons and today returns to the organization that originally drafted him in the third round of the 1983 Draft.  Martinez first served as a spring training coach for Maddon in 2006 and 2007 before being named to the big league staff on October 11, 2007.

Blanco, 43, last year completed a 25-year professional catching career when he retired with the Arizona Diamondbacks at the end of spring training and immediately joined the club’s big league coaching staff as an assistant.   He spent four seasons with the Cubs, helping the club to consecutive National League Central titles in 2007 and 2008.

A memoir by Steven Leventhal - coming soon. I am working feverishly on my forthcoming memoir. This is the story of a pivotal year in my life. In 1978 I graduated in a class of 225 from a small town in North Carolina, and entered college that … END_OF_DOCUMENT_TOKEN_TO_BE_REPLACED

In October 2019, at the Ensemble Travel conference in Seattle, I got to hear and talk to one of the most incredible individuals I have ever had the pleasure of meeting. The theme of the annual travel agent convention was "Travel With Purpose." Spencer West lost his legs below his pelvis at age … END_OF_DOCUMENT_TOKEN_TO_BE_REPLACED

with David Rusch and Steve Leventhal On the July 2021 edition of the Home Improvement USA program, Dave and Steve discuss reasons, other than investment purposes, to buy a home instead of renting a … END_OF_DOCUMENT_TOKEN_TO_BE_REPLACED