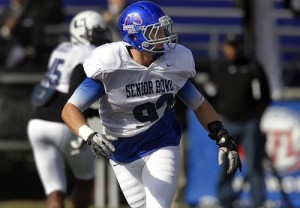 (LAKE FOREST, IL) The Bears held pat, eschewing trade offers both upwards and downwards and selected Shea McClellin, a DE/OLB from Boise State with the 19th pick in the 2012 NFL draft.

Apparently he was a bit of a late bloomer in the draft. It came as a bit of a surprise to the media assembled at Halas Hall to cover the proceedings.

The Bears media info touts the Caldwell, Idaho native as one of the “most underrated defensive ends” in the draft.

New Bears GM Phil Emery likes his versatility, and “natural football instincts,”  capable of both regular and special teams play.  Emery stated, “this is an all downs football player, including special teams. This is a four down player. Our special teams coach gave him a blue level grade as a special teams player.” He went on to add, “He has quick hands and feet as a pass rusher.”

Some of his collegiate stats included 130 career tackles, 20.5 sacks, as well as 33 tackles for loss and two recovered fumbles.

Via speaker phone McClellan said, “I was definitely excited to be part of a great organization and I can’t wait.” Furthermore, he noted excitedly, “It’s awesome, unbelievable to play alongside Julius Peppers and Brian Urlacher. I just can’t wait to get out there. I knew if I went to Chicago I’d get to be rushing the passer a lot.”

A memoir by Steven Leventhal - coming soon. I am working feverishly on my forthcoming memoir. This is the story of a pivotal year in my life. In 1978 I graduated in a class of 225 from a small town in North Carolina, and entered college that … END_OF_DOCUMENT_TOKEN_TO_BE_REPLACED

In October 2019, at the Ensemble Travel conference in Seattle, I got to hear and talk to one of the most incredible individuals I have ever had the pleasure of meeting. The theme of the annual travel agent convention was "Travel With Purpose." Spencer West lost his legs below his pelvis at age … END_OF_DOCUMENT_TOKEN_TO_BE_REPLACED

with David Rusch and Steve Leventhal On the July 2021 edition of the Home Improvement USA program, Dave and Steve discuss reasons, other than investment purposes, to buy a home instead of renting a … END_OF_DOCUMENT_TOKEN_TO_BE_REPLACED