from the SRN wires CHICAGO – The Chicago White Sox have acquired right-handed pitcher Simon Castro and left-hander Pedro Hernandez from the San Diego Padres in exchange for outfielder Carlos Quentin. Castro, 23, combined to go 7-8 with a 5.63 ERA (72 ER/115.0 IP) and 94 strikeouts in 22 combined starts between Class AA San Antonio and Class AAA Tucson in 2011. The 6-foot-5, … END_OF_DOCUMENT_TOKEN_TO_BE_REPLACED

with Les Grobstein, Steve Leventhal, and Alison Moran This is our final WSR show on YourSportsFan, because next week you will read about our new, improved website.  Anyways, today's show is about the last week of the NFL regular season, the last week of 2011, and perhaps the last week of Mike Martz as Bears offensive coordinator.  On the other hand, the Packers will be playing … END_OF_DOCUMENT_TOKEN_TO_BE_REPLACED

from the SRN News wires LAKE FOREST, IL – The Chicago Bears had five players selected to the 2012 Pro Bowl this season: LB Lance Briggs, RB Matt Forté, ST Corey Graham, CB Charles Tillman and LB Brian Urlacher. The five Pro Bowl selections for the Bears are the most for the team since having eight players named to the Pro Bowl following the 2006 season. This is the seventh … END_OF_DOCUMENT_TOKEN_TO_BE_REPLACED 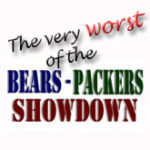 We go back to Christmas Eve of 1996. The Packers were on their way to a date with New England in Super Bowl XXXI, and the Bears finished the season at 7-9. You will hear the debut of a very special Packer Dave "Twas the Night Before Christmas," some bad jokes from producer "Ira Tating," some very good jokes from Steve Kohn, and some great retorts from Len. Get a load of these … END_OF_DOCUMENT_TOKEN_TO_BE_REPLACED

with Les Grobstein, Steve Leventhal, and Alison Moran As the NFL season winds down, the Bears have their last important game, a continuation of the best rivalry in pro sports.  We do the regular round table, have a holiday audio treat for Packer Dave, a preview of the Bulls - Lakers X-Mas Day game, and even manage a little hot stove baseball talk.  Plus Les goes on another rant … END_OF_DOCUMENT_TOKEN_TO_BE_REPLACED

A narrative memoir by Steven Leventhal - coming soon. Sign up for the mailing list to get updates. I am working feverishly on my forthcoming memoir. This is the story of a pivotal year in my life. I had a front seat for one of the most … END_OF_DOCUMENT_TOKEN_TO_BE_REPLACED

In October 2019, at the Ensemble Travel conference in Seattle, I got to hear and talk to one of the most incredible individuals I have ever had the pleasure of meeting. The theme of the annual travel agent convention was "Travel With Purpose." Spencer West lost his legs below his pelvis at age … END_OF_DOCUMENT_TOKEN_TO_BE_REPLACED

with David Rusch and Steve Leventhal On the July 2021 edition of the Home Improvement USA program, Dave and Steve discuss reasons, other than investment purposes, to buy a home instead of renting a … END_OF_DOCUMENT_TOKEN_TO_BE_REPLACED